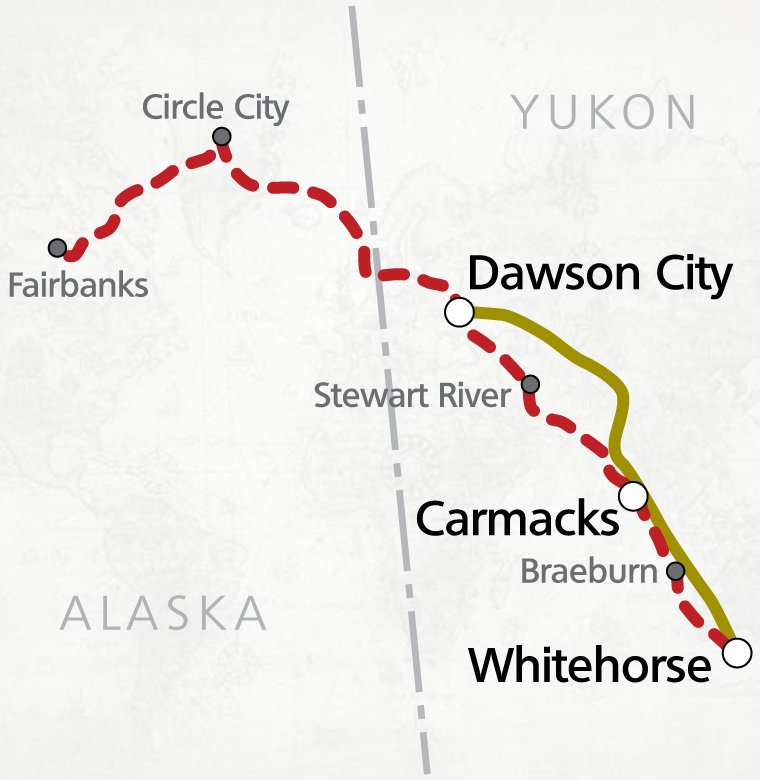 Travel to the Yukon this winter for an unforgettable Northern adventure! Experience the North’s most exciting time of year and its coolest activities for yourself including dog sledding and Northern Lights viewing. Designed around the running of the famous Yukon Quest International Sled Dog Race, considered the toughest sled dog race in the world – competitors travel 1600km from Fairbanks to Whitehorse in as littler as 10 days! – on our Yukon Quest Tour package you’ll experience all the behind the scenes race action as we join the teams on their mandatory 36 hour layover in Dawson City - home of the 1898 Klondike Gold Rush, the greatest the world has ever seen - before travelling onwards to Whitehorse.

While the race is still on we’ll enjoy dogsledding ourself. We’ll learn how to work with a team of sled dogs while they’ll teach us the magic of travelling through the snow covered, northern backcountry.

At the end we’ll have the chance to cheer the teams crossing the finish line in Whitehorse, celebrating their victory to conquer the toughest sleddog race in the world.

Arrive Whitehorse. Your guide will meet you at the airport and provide a transfer downtown. On the way to the hotel, the guide will point out some of the city’s main attractions including the SS Klondike National Historic Site, the Yukon Visitor Centre, the Old Log Church and the Log Cabin Skyscraper. The Yukon’s capital city, Whitehorse is Canada’s largest north of the 60th parallel. With its numerous café’s and galleries and wel travelled, well-educated population, Whitehorse has a surprisingly cosmopolitan feel. But the real beauty of Whitehorse is its proximity to some of the country’s most beautiful natural landscapes, literally just minutes from downtown! Conditions permitting, we’ll have a chance at your first views of our stunning Northern Lights before bed. Accommodation: Whitehorse

We’ll leave the Yukon’s capital city behind for the wilds of the Yukon interior today. As we travel the North Klondike Highway northbound, you’ll begin to get a sense of the sheer size and grandeur of the Yukon. At half the size of Ontario, or roughly the same size as California, the Yukon’s total population is only 42,000 people. Breathtaking doesn’t describe the vastness or the beauty of the Yukon’s wilderness! Our route roughly follows the Yukon River valley and takes us through a few small settlements and villages including Braeburn, Carmacks, Pelly Crossing and Stewart During this northbound trip, we’ll stop by the Five Finger Rapids overlook for views of the 4 impressive chunks of rock in the middle of the river that gave river travelers and paddle-wheelers some difficulty during the gold rush. Crossing before the Ogilvie Mountains come into view. The road then drops down to the famous Klondike River Valley that spawned the Klondike Gold Rush of 1898. Still considered the greatest gold rush the world has ever seen, the gold discovery near Dawson City in 1896 drew more than 50,000 people to the Yukon in 1898, making Dawson City the largest city west of Winnipeg (Canada) and north of Seattle (USA)! As a national historic site, Dawson City today still retains its turn-of-the-century pioneer feel. Saloons with batwing doors and buildings with wooden facades, wrapped with wooden boar walks, line un-paved streets. Straight out of the Old West, this is the Yukon you imagined! We’ll also stop by the official Yukon Quest check point to check on the expected arrival times of the first teams arriving this evening. The town’s fire siren will announce the first team in, and everyone rushes down to the checkpoint to see who has arrived. To add to the excitement, the first team to arrive is given several ounces of gold by Dawson City as a reward. Accommodation: Dawson City.

Today we’ll experience the relaxed pace of Dawson City while we wait for the first team to arrive. Spectators will have the chance to meet the mushers and their handlers as they load the sleds and prepare to depart. And of course, you’ll get up close and personal, with the real starts of the show, the 14 delightful Alaskan huskies that comprise each team. We’ll take a short city highlight tour and point out some of Dawson City’s most famous locations including the Palace Grand Theatre, the former Territorial Legislature (now housing the Dawson City Museum), the Commissioners Residence, the SS Keno and the homes of famous Klondike authors, Robert Service, Pierre Berton and Jack London. Accommodation: Dawson City

Though teams pass through several check points during the race, the Yukon Quest is much more of a test of wilderness survival than Alaska’s Iditarod sled dog race. Teams are required to spend several days between check-points without aid or re-supply, and the Yukon Quest is considered a much more difficult event than the Alaskan race. Yukon Quest teams will be arriving throughout the day, providing many more opportunities for great Quest photos. In between, we’ll visit some of Dawson’s most interesting attractions to gain more insight into the Klondike Gold Rush history and the people, history and culture of the local Trondek Hwechen (Han) First Nation. Teams will continue to arrive throughout the day and into the evening, occasionally under the soaring Northern Lights, making for a memorable evening. Accommodation: Dawson City

We’ll enjoy the atmosphere of this small town with everyone envolved in the race once more. and watch mushers continue their quest to finish this amazing race. In the afternoon we’ll fly back to Whitehorse. In Whitehorse you’ll have time to relax, do some shopping. In the evening you might even want to try to see the Aurora Borealis. Accommodation: Whitehorse

After spending the previous few days watching world-class Mushers, today you’ll get to experience the world of White Fang and Buck for yourself! We’ll travel to a scenic alpine valley located just a short distance outside the city for an introduction to the exciting adventure of dog sledding. You’ll spend the day mushing your own team of Alaskan husky along a winter trail. The swish of the sled’s runners and the panting of the wonderful huskies and the sound of your own heart beating with excitement are the only sounds you’ll hear as we leave civilization behind for the Yukon wilds. We’ll stop for a trail-side lunch before returning to the trailhead. Accommodation: Whitehorse

The first mushers to complete the 1000 miles of Yukon Quest trail are expected to arrive in Whitehorse sometime today. While the mushers can be quite spread out after more than 10 days on the trail, through some of the most remote wilderness in North America, several recent Quests have come down to a sprint finish between two mushers. We’ll be ready to whisk you down to the finish line so you can witness all the thrilling action yourself. Just outside Whitehorse we’ll stop in at the Yukon Wildlife Preserve for views of the many large mammal species that inhabit the Yukon including moose, caribou, musk-ox, elk, mule deer, Dalls sheep and mountain goats! Accommodation: Whitehorse

Time for one last look around town this morning before the transfer to the airport. Check-in for your departing flights. End of tour services. 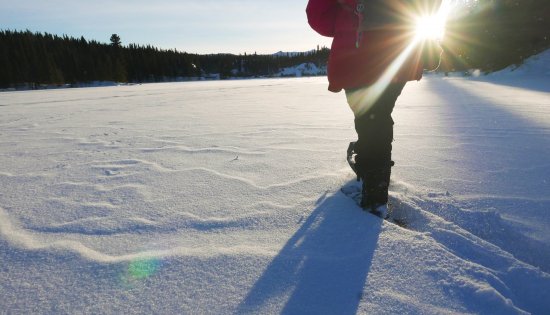